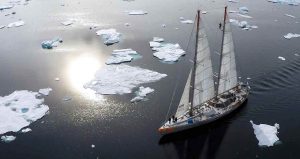 ©Tara expeditions / J. Fidzgerald
This picture comes from googling Tara expeditions on the web. I have just enhanced contrast for a better view on our website. The picture shows Tara sailboat peacefully cruising on quiet icy waters under sails. The boat is one of the most interesting boats sailing today. Not only because of the scientific project around it but also from a technical point of view regarding its design and construction. It was originally designed in order to emulate nineteenth century wooden boat Fram which was used by norwegian explorer Fridtjof Nansen during his expedition to reach the nothern pole by using the natural drift of the polar ice. The boat was designed by naval architects Olivier Petit et Luc Bouvet as Antarctica and was Sea Master later on before becoming Tara.

©Setsail
This picture comes Setsail.com. I have just enhanced contrast for a better view on our website. The picture shows one of their FPB (functional power boats) cruising. To my opinion, Setsail is one of the most interesting players today in the boat industry. Their design premises and the resulting concepts have many common points with Slocum Wing Boats although the aesthetics involved will significantly vary. Despite a divergeant opinion on the propulsion system (Setsail has taken out sails in favor of a diesel engine while at Slocum we have adopted a combination of wings and electrical motors) we are moved by common ideas, in particular the applicability of Nassim Nicholas Taleb’s concepts of the black swan and anti-fragility in our designs.