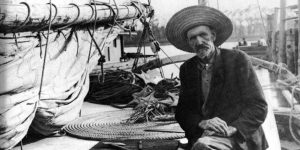 ©Unknown
I found this picture after googling Joshua Slocum. My reading of “Sailing alone around the world”, Joshua’s writing after his all around the world navigation in the Spray, was a fantastic discovery and very soon it appeared to me that the adoption of the name of such a brave man for my dream of building wing boats became quite obvious. Slocum was the first reknown sailor to circumnavigate the world alone in the last years of the nineteenth century in a boat that he had constructed with his own hands. He was a man of great detail during the design of his boat, intelligent in the preparation of his journey and grandiose in its realization. Slocum was a man without studies who made his career in the merchant navy up to the grade of captain of some of the most important sail cargo vessels of his time. Unfortunately the arrival of steam propulsion and some personal misfortunes distanced him from the seas. It was on those sad moments back in land, that he had the idea of a circumnavigation alone.  Guided by pragmatism and effectiveness, he constructed and put into the water in a short period of time the Spray, a ten and a half meter long sailboat full of common sense and astuteness specially adapted for navigation alone. In my opinion, the absence of any doubt in his capacity to succeed in such an ambitious enterprise makes of him a true Captain in the great sens of the term. 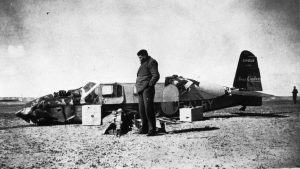 ©Unknown
This picture comes from the Antoinedesaintexupery.com website. The shot was taken in the Lybian dessert and pictures Antoine de Saint-Exupéry in front of the remains of his aircraft after a crash in the night of December 30th, 1935.  I have decided to include this picture as a tribute to a man that has played an important role in the realization of this project… I have always loved the writings of Exupéry, its poetic prose and his grandiose attitude towards human achievements. Not in vain, it was after the reading of one of his texts that I decided to turn my personal dream of a wing boat into a well-structured enterprise. It is a great irony of life that a man that loved so much aviation in general and aircrafts in particular wrote such and inspiring text about the meaning of constructing a boat. I think that his text is more than just an explanation of how to build a boat, I think that it is a metaphor of life itself and how we as human beings are capable of transcending common things and day-to-day tasks to take part into ambitious projects that will extend beyond ourselves. Great man, great writer, no doubt.